I was pleasantly surprised to receive the latest email from the App Store team at Apple, and especially pleased with the topic and the overall message coming from 1 Infinite Loop. With a strong vested interest in seeing the world’s developers localizing their apps, it was music to my ears. 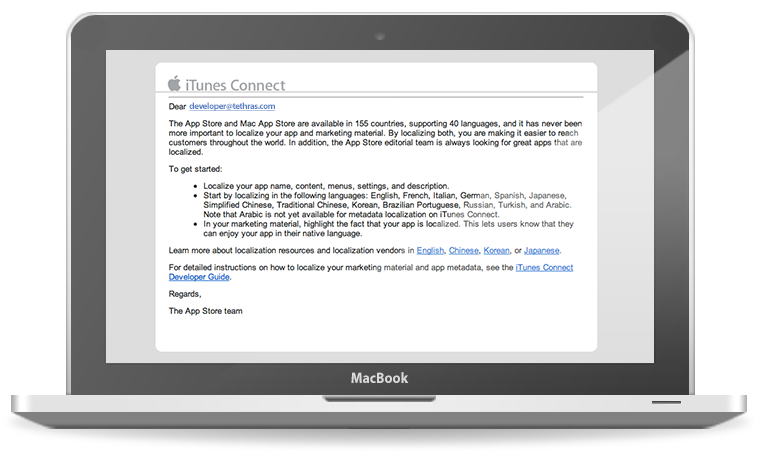 My mood quickly changed from good to great on reading Apple’s recommendations on language regions for localization. Having recently written a blog on this very subject, Into Which Languages Should I Localize My Mobile App, and posted market size Metrics on the Tethras Knowledge Base.

Naturally I set to cross-checking the two lists with fevered anticipation, and with great joy scored a perfect A+ on the 8 regions listed in the blog. Things didn’t look so great when I cross-referenced with the Knowledge Base to check on the remaining 4 regions recommended by Apple. Although we agreed on Brazilian Portuguese, we parted ways on the last 3 recommendations. Our research shows that Dutch, Swedish and Danish are the next largest download regions.

7.14% Wanting to get to the bottom of this, I rechecked all of my calculations, and the source data used. I then realized that the source data provided by Xyologic does not report data for Turkey or the main Traditional Chinese regions of Taiwan or Hong Kong. Although data is reported for the UAE and gives an indirect figure for Arabic, it is the only Arabic-speaking country reported.

Relief in not having erred with our calculations was quickly replaced by frustration at not having access to all of the data. We stand over our analysis of the market and are pleased to have had it substantively confirmed by Apple. Obviously Apple has first-hand access to the exact download numbers and thus knows exactly which language regions provide the greater market opportunities for app developers. Until they decide to start sharing the data, we will continue to second-guess them with the information that is made available and with feedback from our customers.