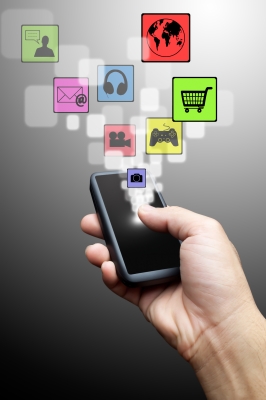 The Asian behemoths take over: Current estimates hold Asia’s smartphone adoption rate at a paltry 19 percent. With such large populations however, the number is misleading. China has already asserted itself as the second largest iOS app downloader in November 2011. Even with 20% lower smartphone penetration in the mobile phone market, the Asian tiger also recently surpassed the U.S. in total smartphone volume and has the highest number of users with two or more mobile phones. As Apple CEO Tim Cook mentioned in their latest quarterly earning review, China is their fastest growing market, by far. As purchasing power increases countries like China and India will quickly overtake the U.S. as the largest app-conomies.

In addition, the dominance of Western entertainment culture throughout the world may continue thanks to apps. Just like Levi’s and Coca Cola, western developers have a once in a generation opportunity to become mainstream household names everywhere from China to South Africa. It’s never been cheaper to do that and there’s never been a more personal experience then being on peoples’ smartphones.

Facebook won’t solve discoverability in 2012: With 500,000 iOS apps and 250,000 Android apps, the app store is becoming unwieldy for discoverability – the market has been waiting for a solution to fill this void, to no avail. Earlier this year, the rumored Facebook App Store showed promise in this regard, but so far web- based apps have had little traction. It will take much longer for a social graph like Facebook to solve the issue of app discovery.

The Next Angry Birds phenomenon won’t come from the Western world: The next mobile app with 100 million users will come from Asia, Latin American or the Middle East. App development has far fewer barriers to entry for those who have the focus and skills to put something together.

2012 will be the year of regionalized and highly contextual apps: Forget countries—expect every politician in America to create experiences relevant to their constituents and ideas. Apps will go beyond just brand and states, becoming increasingly specialized and nuanced.